I made a joke earlier I would hit 100,000 miles by July. I guess I was only joking with myself. That’s a lot of travel. Ironically, my trip from hell last week was what pushed it over the threshold. Fortunately, this has been a week with no flights!

Without a doubt, today has been the worst travel experience. Ever.

I’m finally getting on a plane, but not by much. I landed from a redeye at Chicago O’Hare (ORD) at 5:15 AM – looking to fly to Ottawa (YOW) at 6:30. As I disembarked, the airport was very dark. And there were buckets everywhere. And water everywhere.

Turns out Chicago got about a foot of rain in 2 hours. Whoops.

The consequences of that are pretty bad. First, the roads flooded. Nobody can get to ORD from within Chicago (more on that).

Second – this means canceled flights. All flights to YOW before 1PM canceled. Re-booking looked attractive until I was told that all the connecting fights through IAD, YYZ, etc. would also be canceled – due to no aircrews able to get to the airport on the ground.

Third – getting help is a challenge. I had to wait over an hour to get a boarding pass and get officially rebooked, despite a handy SMS notification. The kiosk was not working. And the line was super-long – because – again – no airport staff. I tried calling the premier reservations lines. No dice. Those are not answered offshore, but by people in Illinois. Who also couldn’t get to work.

Fourth – no food. Nobody could deliver supplies. Roof leaks ruined a lot of the rest.

Fifth – the mayhem continues. My 1PM flight is leaving at 4PM local time. It is confirmed to go. It will be the first flight to YOW. There are many not getting through until tomorrow. And many more trying to get into Canada in any way – given same or worse situations.

Sixth – staying cool? Forget it – the airport is a mess with all the water leaks and damage.

I’ll be 10 hours late by the time I get home. The consolation – there are others in worse shape. I owe the good folks at United Airlines and the ORD Red Carpet Club a big thank you for making things as best as possible under the circumstances. They did not have much to work with. 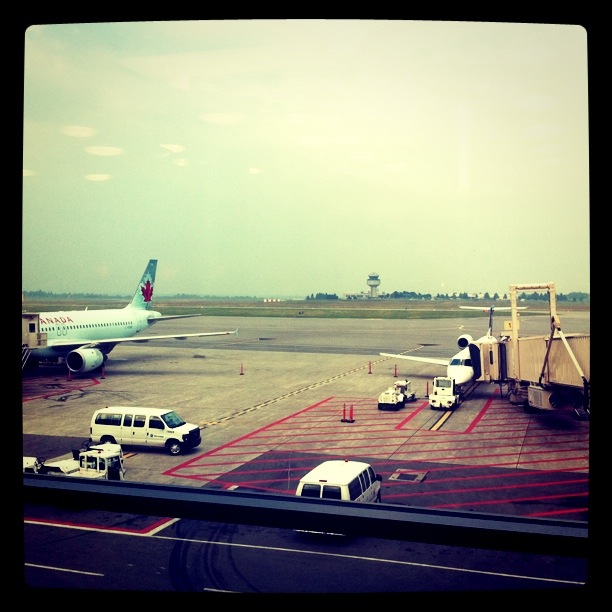 I have broken down and joined Instagram. Look for me on there under ryan_donovan. My first picture? My Continental Express flight to Newark…right next to my fiancee’s flight to Vancouver. Next to each other but separated by the glass of the secure pre-clearance area of US Customs within a Canadian airport.

And speaking of customs…I almost missed my flight. The computers were down. They had no way to let anyone through. So, processing is supposed to begin at 5AM; it was closed until 6:15 when computers were restored. All of the 6AM flights were over an hour late. And the line extended to hundres. Luckily I was early – or I would have missed my flight as they departed at 6:45 (once the flight crew got through) pretty much regardless if folks were there nor not. This in my mind is a huge weakness that should be remediated – otherwise if something really bad happened – the nation’s commerce would potentially suffer as much of a hit as it did around 9/11.

As it was I made my connection and landed in Vegas later (second Instagram photo).

All is well that ends well – and I have a fun, addictive new hobby. But no thanks to a huge liability in the nation’s border system.

I have been doing a fair bit of traveling in the United States. My iPhone 4 is on Telus in Canada. The roaming fees are not cheap. So I’ve whipped out my old US cell account – and put it on a Samsung Focus running Windows Phone 7 (from a Nexus One on Android).

In short, it has been a pleasant surprise. Windows Phone 7 is clearly the best thing Microsoft has done in years. Will it make me give up my iPhone? No…but it is a worthy second in my eyes and an experience I certainly prefer to Android.

The bad- or things that really drove me nuts:
The ugly:
In short – it has a lot of promise. I look forward to Mango.

How I spent my Canada Day weekend…trying to get the washing machine to fit in the closet and get the closet door reattached. and then reattach the broken knob to the washer so that one does not have to use such things as BBQ tongs to change it.

As one can see, the project was a spectacular failure. After removing the washer, removing the outer door, relocating and replacing the dryer vent pipe, and putting it all back together – it doesn’t fit by about an inch. So the door doesn’t shut. It’s progress – as the door wasn’t attachable. But seriously – who makes a washer close that doesn’t fit a washing machine anyone can actually buy? (I bought the smallest I could upon move-in.)

The knob was an even bigger fiasco – spent 1.5 hours soaking the super glue off of my hands – and it didn’t work anyways.

The views expressed are entirely those of the author.

By night, I am a dog-father, car enthusiast, world traveler, photographer, and technical nerd par extraordinaire.

Find Me on Social